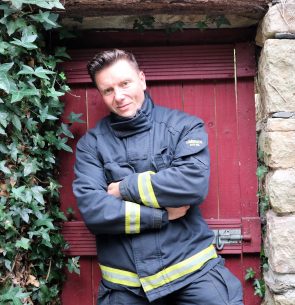 Paul Knapp is “The Firefighting Chef” and has been a firefighter for over 28 years in London and the west coast of Ireland with Limerick City Fire and Rescue. Still a full-time firefighter Paul is a Bi monthly TV Chef on Virgin Media One’s Flagship breakfast show Ireland AM. Leaving school at 15 Paul trained as a chef in London in the late 80’s, before travelling around the world navigating the globe east to west working as a chef. Paul returned to London aged 21 where he found his calling in the fire service joining London Fire Brigade in the early 90’s, before his move to Ireland.

The Firefighting Chef whizzes up accessible, quick and tasty dishes as a regular vegan contributor on virgin media’s Ireland AM TV show. Paul creates a greater awareness of healthier lifestyle choices by showing people how to change to more ethical, plant based food solutions with his no-nonsense, ‘it’s just food’ approach.

‘The Firefighting Chef’ whizzes up accessible, quick and tasty dishes and is a regular contributor on Irish TV on Virgin Medias Ireland AM TV show.

Today Paul will be making a magnificent plant powered pasta puttanesca, with a grated Parmesan-style cheese – a classic dish marrying simple whole foods to get those non-planties attention!