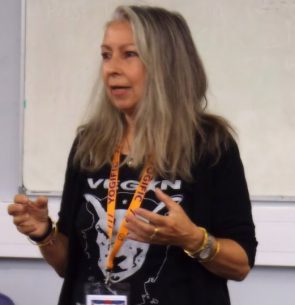 Pamela worked as a freelance investigative journalist for over a decade exposing social and environmental injustice for the UK mainstream press, including the BBC, with whom she made an award-winning documentary.

Realising the embedded agendas of mainstream media, she turned her energies to working with non-governmental organisations in India and South East Asia.

Prior to this the main focus of her activism was catastrophic climate breakdown, particularly its impacts in India, where she lived for five years. Her documentary Climate Change? No Thanks! contrasted the attitudes of western tourists and Indian mango farmers to climate breakdown.

Pamela’s book The No Nonsense Guide to Tourism was pivotal in exposing cultural assumptions on globalisation and the corporate hegemony.

Relocating to the UK, she started Animal Justice Emergency (AJE) – a collective of animal activists focussed on language and strategic activism. AJE reframes the conversation around animals. looking at dominant cultural attitudes and the roles of corporate apologists for the animal death industry and its legitimising by media and individuals as part of the the neoliberal propaganda push.

A regular speaker at events, Pamela’s talks have been described as ‘Like a TEDx talk’, ‘I nearly cried’, ‘Inspirational’.

A panel to discuss how education and disruption can help to build vegan awareness.

Words create emotions; emotions create actions. By changing the words we use to accurately portray the reality of animal oppression, we open up new possibilities for change and influence.

Naming and calling out human supremacism and exposing the deliberate hiding of the realities of the animal death industry and the ways in which non-human persons are marginalised, open up opportunities for radical and effective activism at all levels.

By describing what ‘farmers’, ‘meat’ and ‘non-vegan’ (and other loaded terms) actually mean, the invisible is made visible and denial gives way to understanding and change.