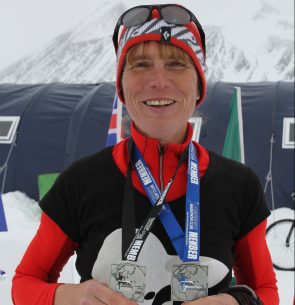 Fiona Oakes somehow finds time to be both an elite marathon runner and a carer of over 500 animals at the Sanctuary she founded in 1996 – Tower Hill Stables Animal Sanctuary. Proving that vegans are some of the most energetic people around,

Fiona has competed in over 100 marathons and finished in the top 20 in two of the world’s Major Marathon series (Berlin and London), along with winning the Main Start and placing top 20 in the Great North Run.

In conjunction with an illustrious road Marathon running career in 2012 Fiona became the first vegan woman to complete the gruelling Marathon de Sables – a race she has completed twice more since – and in 2013 won the North Pole Marathon (yes, at the North Pole!) and it’s ‘sister’ race the Antarctic Ice Marathon.  She now holds four Guinness recognised World Records in endurance events including being the fastest woman to run a Marathon on every Continent.

Fiona’s successes are even more impressive when one learns she lost a kneecap as a teenager, causing her to experience constant pain when running.

She does all this to promote an ethical vegan lifestyle and to raise awareness of her Sanctuary. Fiona is the subject of a documentary made by prominent film maker – Keegan Kuhn (other notable documentaries in his portfolio include Cowspiracy and What the Health) – who wanted to chart Fiona’s commitment to veganism so far as he feels her position is unique in the vegan movement.

Vegan for almost her entire life she actually cares for, on a daily basis, the animals she endeavours to protect and has a very deep and expert knowledge of what is required to do so and their behavioural traits and needs – something which the general public are often very mislead in their understanding of.

Her running resume speaks for itself but is unique in the fact that all her results have been on achieved on a total vegan diet from a very early age so no muscle mass has been built on animal products of any kind.  Basically, Fiona’s whole life has been dedicated to the promotion of veganism in a positive, proactive and peaceful way and she is living proof of its sustainability, longevity and viability for both mental and physical wellbeing.

Fiona is now becoming a recognised name in the world of public speaking and invited to many events and education centres – both vegan and non vegan – around the world to speak on issues surrounding her lifestyle choices.  Not only what she eats but why she has chosen this path and how it not only has positive impact on her own health but that over other humans around the world in terms of more equal distribution of food resources, the climate through the potential eradication of animal agriculture and, of course, animal welfare issues surrounding it.

“It’s tempting to keep rescuing more non-human animals, yet regardless of how big my sanctuary becomes, I won’t even be scratching the surface. On the other hand, the adoption of Veganism has the potential to save far more animals in the long term than I could possibly do my entire life. I want to be a part of making that happen and sharing with the world the positivity of a vegan lifestyle for all the planet’s inhabitants, both human and non human alike.” – Fiona Oakes

Fiona Oakes for the Animals gives an insight into the inspirational story of Fiona Oakes: the fastest woman to run a marathon on every continent plus the North Pole. Fiona has been vegan since 6 years old, and runs to prove that veganism is not prohibitive to performance. She also runs Tower Hill Stables Animal Sanctuary, home to 550 rescued animals.