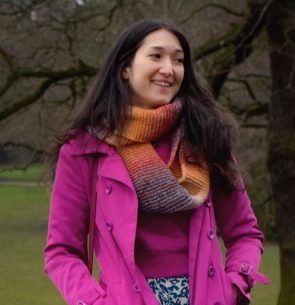 Emma is a volunteer with Animal Think Tank and a researcher in Linguistics at Lancaster University. Her focus is on how we talk about killing, and how this differs when talking about humans or other animals. She gives workshops on how language about other animals can itself reinforce speciesism, and what we can do to change that in the name of Animal Justice. She has been an organiser for Food Not Bombs, a volunteer at West Midlands Vegan Festival, and a researcher at Opera North in language and communications. She has organised and/or taken part in a range of language-as-activism events, including Language Awareness, Earth First! Summer Gatherings, and Direct Action Through Discourse Analysis.

We all harm animals; we all invade their spaces and land; we all bystand the harm others do to them; we all prefer some species over others; and we all deny much of what happens to other animals. To be effective advocates to end crimes against other animals we need to tackle our own everyday speciesism. This session will look at what we can do in our everyday lives as animal advocates to bring about animal justice.