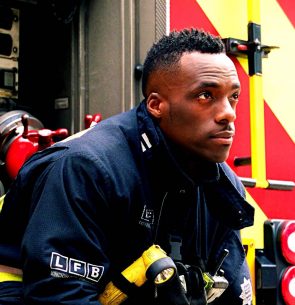 Edric has become a recognisable face in light of his appearance on ITV’s three-part episode Inside the London Fire Brigade aired the year before last.

He recently resigned from his position as Crew Manager and published his first book with Penguin Random House – Into the fire. This is his amazing journey not just in the Brigade but throughout his life. Detailing the countless losses he has experienced in life including losing his Mother at an early age and having to raise his 12 year old brother as well as the highs and lows of his career.

He is now a personal trainer and life coach concentrating on changing lives through physical training and plant-based nutrition.
Edric became a vegan 3 years ago at the age of 33 after watching the documentary Earthlings. It made him question his belief system and a decision was instantly made to refrain from using animal products. An overnight transition.

Promoting veganism is something he’s very passionate about. He dreams of a world of love and compassion for all beings, he dreams of a time in which all lives are recognised as equal. Until such a time, he will continue to promote veganism, health and conscious living.

He has just completed the manuscript for his second book, due to be published by HayHouse in January 2020 next year – The Fit Vegan. This outlines both his vegan and fitness journey and acts as a guide to those contemplating the transition as well as those who desire optimum health, both physical and mental.

Let Food Be Thy Medicine

I will outline my journey in to veganism explaining how and why I went vegan as well as the impact it has had on my life. I will also speak of the miracles i have witnessed through family members transitioning to veganism. My 1st cousin in the US who’s precancerous cells progressively worsened over three years until she joined the vegan camp and my Father who was diagnosed with prostate cancer at a very late stage who now lives his best life following a transition to veganism. I will also talk about the magic combination of veganism and fitness and the astounding effects it can have on your world.