Bristol – Endorse the Plant Based Treaty – Before it’s Too Late

A petition has been launched in Bristol to urge the Council to endorse the Plant Based Treaty and adopt more plant based options wherever possible, in response to the growing climate crisis. Since the UN climate report in 2006  highlighted animal agriculture as a leading cause of global emissions and environmental destruction, calls have been growing worldwide to adopt a plant based strategy for food systems and production in order to meet net zero targets.

‘Bristol already leads the way in the world when it comes to plant based options’ says Tim Barford of VegfestUK, one of the Bristol based businesses behind the petition. ‘We have 3 vegan MP’s, a vegan deputy mayor and a big Green representation in the area, as well as cross party support, national campaigns groups, a number of vegan friendly businesses, and grassroots organisations all pushing to get plant based options as the default wherever possible. Now we are asking the people of Bristol to sign this petition to ensure a debate takes place within Council to adopt the Plant Based Treaty. We need to act – and this is one way we can really help.’

The petition states ‘’Animal agriculture is a key driver of deforestation, accelerating greenhouse gases, land-use change, ocean dead zones, and water and air pollution. Cuts to methane emissions are our best hope of keeping 1.5 alive over the coming decades, due to a third of methane emissions coming from animal farming. Joining towns and cities across the UK in endorsing the Plant Based Treaty will help pressure national governments to 1. Halt the global expansion of deforestation attributed to animal agriculture. 2. Incentivise a plant-based food system. 3. Encourage public information campaigns about the benefits of plant-based foods. 4. Free up land to rewild and reforest the Earth. 5. Allow a just transition to more sustainable jobs, healthier people and a healthier planet.’’

3,500 signatures are required to trigger a Council debate and the organisers are confident of achieving that figure and seeing Bristol adopt the Plant Based Treaty. ‘’We have to act’’ adds Barford ‘’ and that time is now, not some time in the future. It’s our combined responsibility to take care of the planet for future generations, and halting the destruction that animal agriculture causes is a massive step towards not only climate justice but also food justice and animal justice. Together we can do this but we don’t have the luxury of leaving it much longer. If Bristol adopts the Plant Based Treaty we become the first city in the UK to do so and that could trigger a whole run. Imagine that. The UK adopting plant based food system enables an incredible transformation on so many levels. It’s within our power still but that window is closing.’

The petition is live, and sees an official launch on Sunday May 22nd between 11am and 1pm at College Green Bristol with a number of speakers and supporters gathering to give the petition its official lift off, including Deputy Lord Mayor Andrew Varney & Green Party councillor Martin Fodor. The petition is available both to sign manually and also online, and is backed by a number of individuals, businesses and local groups including Bristol Animal Save Animal Rebellion and Viva!

To find out more about the Plant Based Treaty, visit the website   https://plantbasedtreaty.org/ 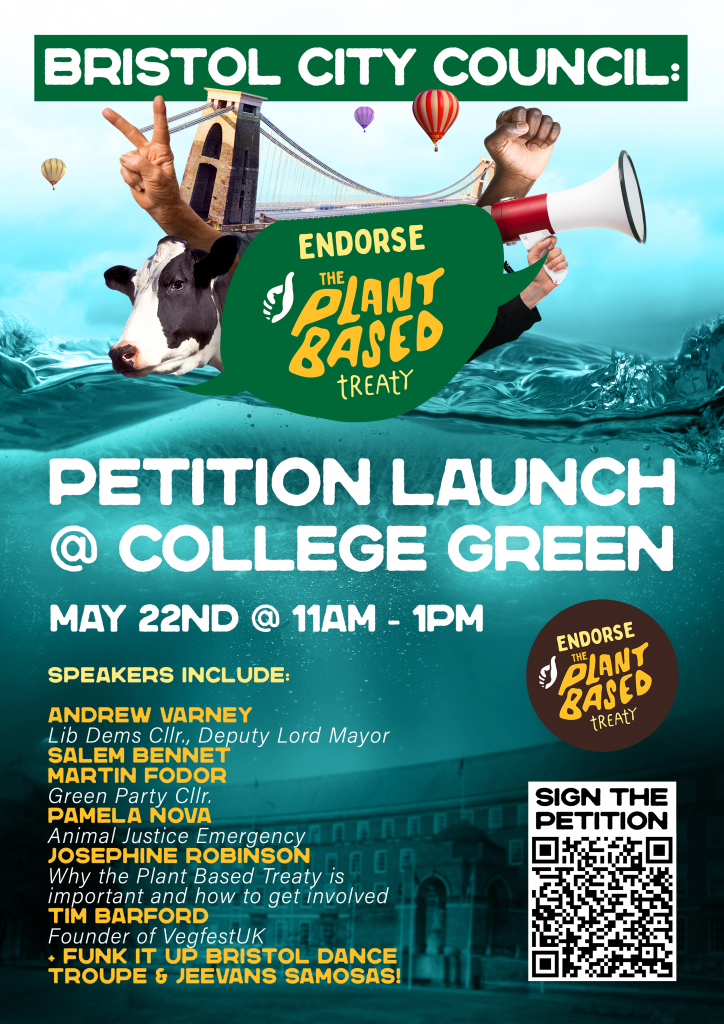